What is Oil Pulling?

Oil pulling is nothing but a detox process against all the toxins accumulated the night before in your mouth. It involves swishing oil around the mouth like a mouthwash.

Based on the concept that oil attracts oil and gets easily dissolved into it. As the microorganisms in our body are covered in lipids (fats), swishing oil attaches all the microorganisms with itself and dissolves them in the liquid oil. Well, when you spit it out, your mouth is free from hundreds of bacteria.

Which is the best oil for oil pulling?

Pure coconut oil (virgin or cold pressed) is a popular choice for oil pulling because of its pleasant taste.

For oil pulling, coconut oil is recommended because it has fatty lipids containing a high amount of lauric acid, which has anti-microbial and anti-inflammatory properties that protect against cavities, excess plaque, and gingivitis.

It is recommended to do this empty stomach for the best results.

Some of the science-backed benefits and uses of oil pulling are: 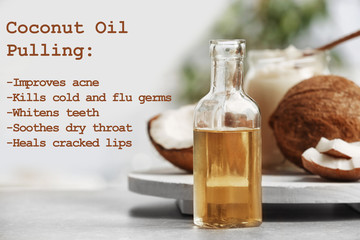 There are almost 700-800 bacteria present in your mouth. Streptococcus mutans are the main bacteria that cause tooth decay and many other oral ailments. Some studies prove that using coconut oil can significantly reduce the number of bacteria including streptococcus mutans.

Bad breath is mostly caused due to acidic reactions of plaque and food particles, inflammatory gum diseases, or tongue coating which all are caused by bacteria. The study proves that coconut oil is effective in reducing bad breath as it can remove bacteria like chlorhexidine mouthwash due to its anti-microbial properties.

Inflammatory gum disease Gingivitis is caused by bacteria found in plaque. It causes red and swollen gums because when excess plaque is developing, the human immune system starts correcting it through gums, which causes an acidic reaction and leads to gingivitis. It causes inflammation and bleeding in the gums.

The causes of the cavities are eating too much sugar and plaque build-up. Plaque is the coating of bacteria, saliva, and food particles. When bacteria break down the food particle it causes an acidic reaction causing tooth decay. Oil pulling kills the harmful bacteria and increases saliva secretion which is important for the breakdown of food so that the stomach can easily digest it and fight off bacteria.

Plaque forms when bacteria in your mouth mix with sugary or starchy food. The oil pulling swish off remaining food particles and bacteria of the mouth before they form an acidic reaction to cause plaque.

If not removed on time this plaque can harden into tartar, which only a dental professional can remove.

No study evaluated the coconut oil pulling effect on teeth whitening, but some claim that coconut oil for teeth can pull off stains from the teeth, resulting in a whitening effect. As it protects the enamel layer from bacteria and reduces its thinning which is the major cause of teeth appearing yellow by exposing the dentine. 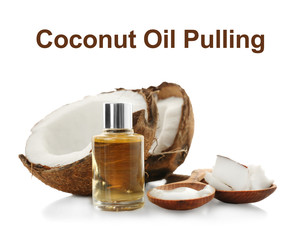 When do you need to brush your teeth before or after oil pulling?

While oil pulling helps in reducing bacteria and protecting against tooth decay. There is no study to prove that it can reverse cavities. The dental cavity is the permanent damage to the enamel layer and can’t be reversed.

How often should you do oil pulling?

One can do the oil pulling process daily up to three times a day. You can start with a few times a week and then start doing it daily. You may also start with at least 5 minutes to 15-20 minutes daily.

Coconut oil pulling is mostly considered safe, but it could be unsafe if:

Oil pulling should be an add-on to your oral care routine rather than only using it as brushing and flossing are very important for oral health. One must also make sure to spit out the oil after the oil pulling process because it is what the whole process is all about, to spit off all the harmful bacteria from the mouth.